"Grinding New Lenses," a four-week summer camp supported by a MacArthur Foundation grant, combined intensive professional development in design thinking for teachers with their leading a program for sixty-five rising sixth- and seventh-grade Chicago area students that engaged them as game designers and digital storytellers. "The end result: students who learned to take on roles as proficient designers, philosophers, writers, and activists; teachers who become avid systems thinkers; and strong curricula that underwent a rapid process of iteration, innovation and refinement." This article and the related NWP Radio show offer inspiration for teacher leaders planning youth opportunities focused on developing students’ digital literacy. 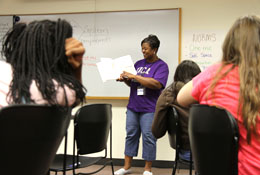 Twenty people huddled together in passionate discussion, peppered with words like “iteration,” “cycle” and “feedback.” They were not geeks partial to jargon, nor hard-core gamers; they were actually elementary school teachers participating in Grinding New Lenses, a unique four-week professional development intensive and summer camp for kids held in July 2011 at DePaul University.

The camp—a collaboration between Institute of Play, DePaul University, National Writing Project, and Indiana University—brought together nine master teachers from across the country and sixty-five rising sixth- and seventh-grade students from the Chicago area around an innovative new pedagogy, based on design, collaboration, and systems thinking.

Systems thinking is a perspective that challenges people to see the world as made up of complex, interconnected systems, rather than of discrete, unrelated things and occurrences. And it is the new worldview the camp aimed to inspire first in teachers, then in their students.

The camp kicked off with a two-week introduction for teachers into each of the three camp curricula: Short Circuits, Game Design, and Digital Storytelling. For the remaining two weeks of camp, teachers went to work on each of these curricula with students, one week per curriculum with student groups that rotated. Because the teachers were learning alongside students, the learning environment was especially rich.

The end result: students who learned to take on roles as proficient designers, philosophers, writers, and activists; teachers who become avid systems thinkers; and strong curricula that underwent a rapid process of iteration, innovation and refinement.

Deirdre Floyd, a teacher-consultant with the Central Texas Writing Project, commented, “This amazing piece of 21st century learning is opening many doors for students to grow while engaging in play.”

The Complexity of Designing a Coherent Experience of Play 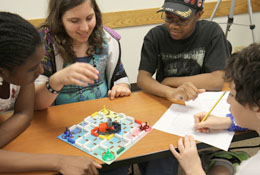 The camp’s first strand, Short Circuits, leveraged physical computing and soft circuits as the context for exploring a collaborative design process and systems thinking. Using conductive thread, Velcro, and LEDs, students worked to integrate electronics into bracelets, T-shirts, and backpacks, while learning the basics of circuitry. Melissa Morgenlander, a co-author of the Short Circuit curriculum, was particularly impressed by the teachers’ ability to use the material to help students become fluent in systems thinking.

The camp’s second strand explored game design, using the online game design platform, Gamestar Mechanic. The goal was for students to experience games as complex systems, whose component parts conspire to produce a coherent experience of play. As Rafi Santo, a graduate student from Indiana University, put it, “Tweaking just one component can make or break your entire system.”

Students began by playing games like Pac-Man, Space Invaders, and Super Mario Bros. as an introduction to basic game design concepts and mechanics, like leveling up, feedback, obstacles, challenges, and goals.

Then they used Gamestar Mechanic to begin designing their own games. The Gamestar Mechanic team of teachers, Eric Tuck and Deirdre Floyd, emphasized pattern recognition, as students prepared to enter the week’s final challenge: designing a game within tight design constraints. The challenge pushed students to think critically about the commonalities and contrasts that a single set of design principles can give rise to, and how these commonalities and differences affect the experience of play and the ultimate success of a game.

The camp’s third strand on digital storytelling using Scratch aimed to cultivate students’ ability to see their own community from a systems perspective. Scratch is an easy-to-use building-block-based programming language students can use to create short animated digital stories, in much the same way that kids can use Lego blocks to build buildings.

Teachers began by providing students with models of systems thinking in books like Dr. Seuss’ The Lorax or Laura Joffe Numeroff’s If You Give a Mouse a Cookie. Students quickly caught on and began using Scratch to create their own narratives about issues that systematically impact their own communities. Students were tasked with identifying how particular community issues originated and how and why they persisted, along with possible solutions.

The Scratch teacher team, composed of Janie Brown, Jenilyn Redila, and Trina Williams, was enthusiastic about the students’ responses to Scratch and reported that students quickly grasped the relationships and connections involved in both good computing and good storytelling.

Brown, a teacher-consultant at the University of Central Arkansas, commented, “Once we collectively look at the stories, we’re all able to see the systems more clearly. Students often compare their stories, which allows them to discover other aspects of a system. They are thinking deeply and applying their thinking.” Ms. Redila expressed wonder at how totally immersed students were in their tasks, despite summer vacation . . . and a heat wave!

Grinding New Lenses is part of a three-year grant from the MacArthur Foundation, awarded to Kylie Peppler, Melissa Gresalfi, Nichole Pinkard, and Katie Salen. Many of the camp’s student participants will enter ChicagoQuest this fall in the sixth and seventh grades. ChicagoQuest is the first adaptation of the unique game-like learning model pioneered at the Quest to Learn public school in New York City, which was profiled in the New York Times article, Learning by Playing: Video Games in the Classroom.

Eight teachers from three National Writing Project sites spent a month in Chicago exploring the power of systems thinking to support students in the way they learn, make, and write. Of particular interest to teachers planning and leading young writers programs that focus on digital literacy, this project, called “Grinding New Lenses,” engaged teachers in their own learning and thinking about systems, followed by an opportunity to lead a summer camp with youth from the surrounding area.
Read more

Even though the sun stays a bit lower and leaves us more quickly during the winter months, that doesn’t mean that we can’t spend time outdoors and do some writing. Here are a few cool activities that we saw during Write Out 2022 that you might want to try with your family and friends over the upcoming months and holidays.
Read more
Log in or register to bookmark your favorite content
You'll be redirected back here after logging in or registering.
Log in Register