Jesse Hagopian—a high school history teacher in Seattle and founding member of Social Equality Educators—participated in the boycott against Seattle Public School's mandated Measures of Academic Progress (MAP), along with numerous other teachers in the area. He shares how the boycott was organized and what lessons it holds for those who want to "liberate education from the standardized testing regime." 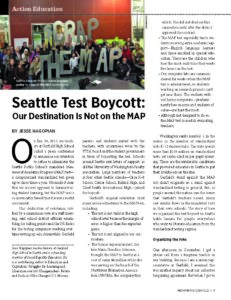 Download “Seattle Test Boycott: Our Destination Is Not on the MAP”

Teachers had been complaining of the many flaws of the MAP test for years—including by resolution at a citywide union meeting in 2010—but now it seemed Garfield teachers were ready to take action. We organized meetings of teachers in the tested subjects—reading and mathematics—to see what action they might be prepared to take.

Once we had heard from all the teachers in the tested subjects, we brought up the question of a MAP boycott at an all-staff meeting. Teachers asked me what the consequences could be. I didn’t sugarcoat it: “If you refuse a directive you can be labeled ‘insubordinate.’ We have a progressive discipline policy in the Seattle public schools, but ultimately your job could be on the line. However, if we all refuse to give the test, I would be surprised if they fire anyone.”

A highly respected teacher rose and addressed the room: “This flawed test is going to label my students and me as failures because it isn’t testing what I am teaching. I would rather be reprimanded for standing up for what I believe in than for sitting back and letting this test take advantage of me and my students.”

That was it. A unanimous vote to boycott the MAP test followed.

Whose Core Is It?

By Christina Puntel
An elementary school teacher and bilingual coordinator pushes back against the mandated content/performance descriptors provided by her district to assert that the "core" of her curriculum is her students' learning. "I teach with an ear close to the core of each child, to the core of the monarch unit, the silkworm unit, the family songs unit...." Her important reflection on the humanity of the students at the heart of classrooms and curricula will be of interest to teachers and study groups wrestling with the influence of mandated curricula on their teaching.
Read more

By Bob Fecho
This brief article describes how the San Diego Area Writing Project (SDAWP) created professional development around a mandated writing curriculum. While the idea of a mandated writing curriculum runs counter to NWP principles, the need to support teachers required to use certain materials remains essential. The SDAWP shares how they successfully navigated competing ideologies through a series of teacher study groups that explored the materials’ strengths and weaknesses, identified key processes/skills being taught, and created supplemental mentor texts and models to help teachers meet the on-the-ground needs they encountered as they used the materials. This article would serve as a good discussion piece for any group of educators designing professional development where they are asked to be involved in curriculum implementation.
Read more

By Joe Check
How should teachers pro-actively respond to school reforms mandated from above? This article advocates for teachers to take the lead in determining how these reforms are best implemented at the school and classroom level through reflective inquiry practices. Specifically, the article covers three main lines of inquiry: 1) What effect is reform having on the climate for reflective practice in our school system? 2) What is the teachers' understanding of system-wide change? 3) Has the reform honestly acknowledged the social, cultural, and contextual barriers to students' academic success? These questions, and Check's discussion of them, offer great starting points for teachers to confront problematic mandated reforms in a professional development context.
Read more
Log in or register to bookmark your favorite content
You'll be redirected back here after logging in or registering.
Log in Register