Summary: Although conversations about race and diversity are not easy, they can allow teacher leaders to examine and interrogate their beliefs and practices to determine the direction of their teaching and of their writing project sites. This article describes how the South Coast Writing Project spent two years engaged in “courageous conversations” around issues of diversity as a way to better meet the needs of the linguistically diverse student population in the area. Also included are useful details on how the program started with an open institute and links to several of the key resources used throughout the project’s implementation. The article and its related resources might inspire study groups and leadership teams to engage in their own critical reading and courageous conversations.

A commitment to equity and diversity in schools and writing project sites often takes courage—and “courageous conversations,” as the South Coast Writing Project (SCWriP) puts it. 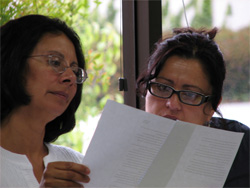 For the past two years SCWriP has engaged in a series of “courageous conversations” about race and diversity. These conversations—often challenging—involve teacher-consultants and site leaders examining and interrogating their own practice, as well as the work of SCWriP itself.

“We really intentionally focused on doing self-reflections,” explains Mary Arias, SCWriP’s English language learners coordinator. “Teachers looked inward, at their own classrooms, at their own campuses.”

Teachers find the conversations critical in supporting their work as they face the new challenges posed by the growing number of English language learners.

“Teachers are saying this is a huge need,” explains Arias. “They’re saying, ‘We need help working with our English language learners.’ If SCWriP is able to say, ‘We can help your students write,’ there’s a big space for that.”

For the past year, the conversations have been supported with a minigrant, which helped a group of SCWriP teacher-consultants create an inquiry team with a focus on the context and culture of classroom instruction for English language learners, particularly with regard to race and equity.

The team met over the course of the year, their work culminating in July with a three-day program: Open Summer Institute for Educators of English Language Learners. Guest presenters for the occasion included Linda Christensen, director of the Oregon Writing Project at Lewis and Clark College, and Jorge Cuevas-Antillón, a California educator who works predominantly among schools dealing with language acquisition.

Christensen and Cuevas-Antillón were selected because of their work in the area of educational equity. Cuevas-Antillón presented on language, content, and literacy needs of English learners and Christensen discussed the politics of language.

Based on the success of that open institute, SCWriP continues to hold bimonthly meetings to extend this work and build its capacity to support teachers of English learners. The ELL study group renamed itself “Courageous Conversations Continued,” or CCC, after a reading of the text Courageous Conversations About Race by Glenn Singleton and Curtis Linton (Corwin Press, 2006).

Members set norms with the help of an outside facilitator, Jarrod Schwartz of the organization Just Communities, and continued refining these norms throughout the year. The goal of creating a more diverse membership and leadership within SCWriP was revisited and considered of paramount importance in addressing the issue of equity in teachers’ schools.

Rosemary Cabe, SCWriP co-director and a participant in the CCC meetings, says that the group discussions called on everyone to revisit their thinking on a variety of challenging issues. For instance, previously when she heard someone refer to racism, she thought of an overt action—a commission. But through the group discussion process, she came to understand that racism can also refer to omissions—a lack of awareness that is inadvertent.

At one meeting group members reexamined Ruby Payne’s A Framework for Understanding Poverty (Aha! Process Inc, 2005)—a book that led to widespread professional development financed by school districts—and the rebuttal article “Miseducating Teachers About the Poor,” by, among others, Heart of Texas Writing Project director Randy Bomer.

In addition they read “Profoundly Multicultural Questions” by Sonia Nieto and “The Myth of the Culture of Poverty” by Paul Gorski.

This examination of the literature was critical, Arias says, because it gave the study group members a sense of their own responsibility in sorting through what may be put forward, like Payne’s work, as the basis for classroom instruction.

“I think there was a moment when we as educators were challenged to look at information more critically,” Arias says. “It was an aha moment when we met and the study group members said, ‘I have a real responsibility to be sifting through this and asking myself, why is this being said and who is saying it?'”

The work of the CCC inquiry group, Arias says, involved pushing past the idea that ELL instruction is “just good instruction”—questioning that premise, inquiring about the specific educational needs of students from diverse cultural backgrounds, and identifying ways in which the context of instruction and the culture of the classroom intersect.

The group’s work gave participating teacher-consultants the tools necessary to view themselves as “advocates” of racially and linguistically diverse students.

The site’s conversations went beyond changes in classroom practice, however; they also led to the furthering of long-standing conversations at the site, Arias says. As a result of those conversations, the site’s leadership is attempting to make changes that reflect the site’s commitment to equity and diversity.

For instance, SCWriP is revising its summer institute readings to include more diversity. The site’s Spring Renewal meeting speaker is a woman of color, who will be talking about issues of diversity in schools. And during a February workshop, two of the speakers were bilingual teachers of color, and parts of the presentation were delivered in Spanish and English, reflecting the fact that there were a number of bilingual teachers attending the workshop who chose to write and share in Spanish.

The need to create public spaces for open and honest dialogue was reiterated during last year’s election by President Barack Obama in his national address on race. He purposefully highlighted our societal responsibility to improve educational opportunities for our racially and linguistically diverse students:

For we have a choice in this country. We can accept a politics that breeds division and conflict and cynicism. We can tackle race only as spectacle, as we did in the OJ trial; or in the wake of tragedy, as we did in the aftermath of Katrina; or as fodder for the nightly news.

That is one option.

The South Coast Writing Project, through its Courageous Conversations Continued work, has heeded that call.