In this award winning essay, Native American teacher and NWP site director Michael Thompson, reflects on his own practice and shares findings from research interviews he conducted with instructors in tribal college and university classrooms to learn how they approach literature and writing. In particular, he wondered if assigned texts represented "the value that Native people have historically given to traditional stories, teachings, speeches, tribal journeys, and accomplishments." Instructors reported that Native communities typically value the spoken word over the art of writing and described language practices such as collecting personal narratives of elders in documentary films and digitized recordings. Classroom teachers, study groups and professional development leaders interested in exploring resources and practices that support efforts to "reclaim and honor oral traditions" of native peoples may find this article of interest. 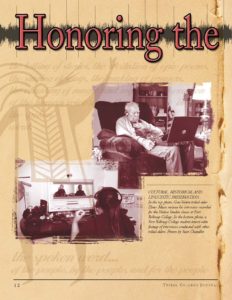 But in numerous ways it has become evident to me that Native communities generally value “the word” itself above the art of writing and that there are, in fact, powerful and compelling reasons why this is so. In recent interviews for this article, I have found this opinion to be widely shared among tribal educators.

Let me express these contrasting views as I have come to understand them. The Western view: A gifted individual, such as a Shakespeare, out of his own imagination uses the many complex techniques of rhetoric and composition to create a work of art, which we lesser mortals struggle to fully appreciate through a complicated process we call literary analysis.

The Indigenous view: The oral tradition represents “the other side of the miracle of language” as described by N. Scott Momaday in The Man Made of Words: “the telling of stories, the recitation of epic poems, the singing of songs, the making of prayers, the chanting of magic and mystery, the exertion of the human voice upon the unknown—in short, the spoken word.” To paraphrase a familiar document, this sounds to me very much like a literature “of the people, by the people, and for the people.”

The basic difference here can be simply stated as the Tribe vs. the Individual.

By Michael Thompson and Laurie Smith
With the goal of providing materials to inform teachers' understanding of Native American cultures, Thompson and Smith have compiled an annotated bibliography of "must-read" texts on the subject. This excellent resource can be used to inspire and guide groups of teachers in building local communities of inquiry devoted to Native American Studies.
Read more

Writing from the Feather Circle

By G. Lynn Nelson
In this resource, a writing teacher from Arizona applies the Native American feather circle to the teaching of writing and describes her work teaching sections of first-year composition exclusively for Native American students. The feather circle focuses on speaking from the heart; in the classroom this approach involves writing honestly and openly first and worrying about form later. The author shares the writing experiences of her students using a culturally responsive stance, and describes how an emerging group, "Native Images," has shared their writings and art in community-based settings and at conferences across the country. This resource would be useful in teacher discussions of culturally relevant pedagogies for writing.
Read more

Why We Are Sticking To Our Stories

By Tina Deschenie
In recounting the power of the oral tradition of storytelling, Tina Deschenie describes the mesmerizing experience of listening to her father tell elaborated stories in the Diné language about Coyote as well as numerous other literacy practices grounded in "the power and beauty of oral tradition and face-to-face storytelling." This piece could be used within professional development or study groups advocating for culturally relevant practices, bi-literacy, family and community traditions, and exploring innovative ways to bring native stories, that might range from capturing oral histories to digital animation, into classrooms.
Read more
Log in or register to bookmark your favorite content
You'll be redirected back here after logging in or registering.
Log in Register