This article describes the work of immigrant youth in the South Bronx as they discuss Sold, a novel about a Nepali girl whose stepfather sells her into slavery. A LRNG grant developed by the NYC Writing Project and four teachers enabled youth and teachers to use the Youth Voices platform for this and other student-driven online writing projects that fostered opportunities to write for authentic audiences. 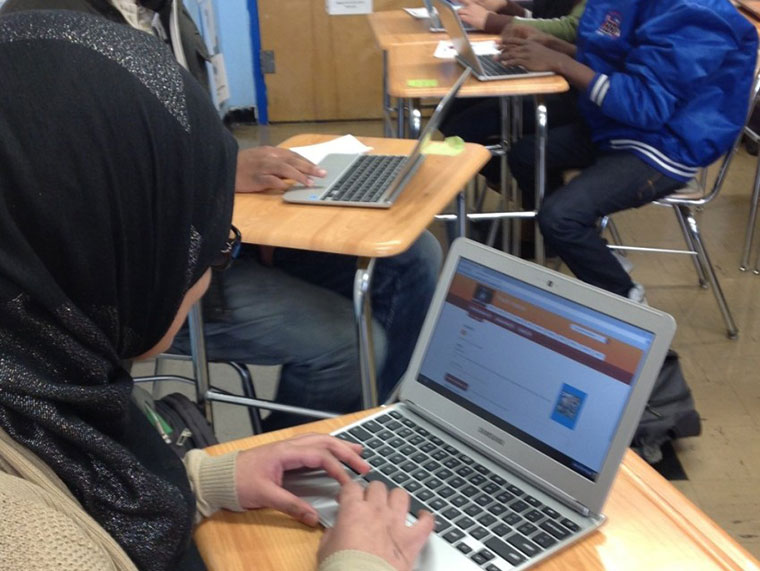 You never know what conversations you might come across on Youth Voices, a blog that is home to thousands of teen-written posts and comments on current events, gender inequality, and other topics. Last March, a discussion arose around the novel “Sold, by Patricia McCormick, about a Nepali girl named Lakshmi whose stepfather sells her into slavery.

A high school student from Senegal named Fatou, who is learning English, brought up the abuse of Senegalese children known as talibés. “They force student who’s studying the Quran to go out and beg for money and bring it to their teacher,” Fatou wrote. “And that is a type of slavery, just like Lakshmi’s.” 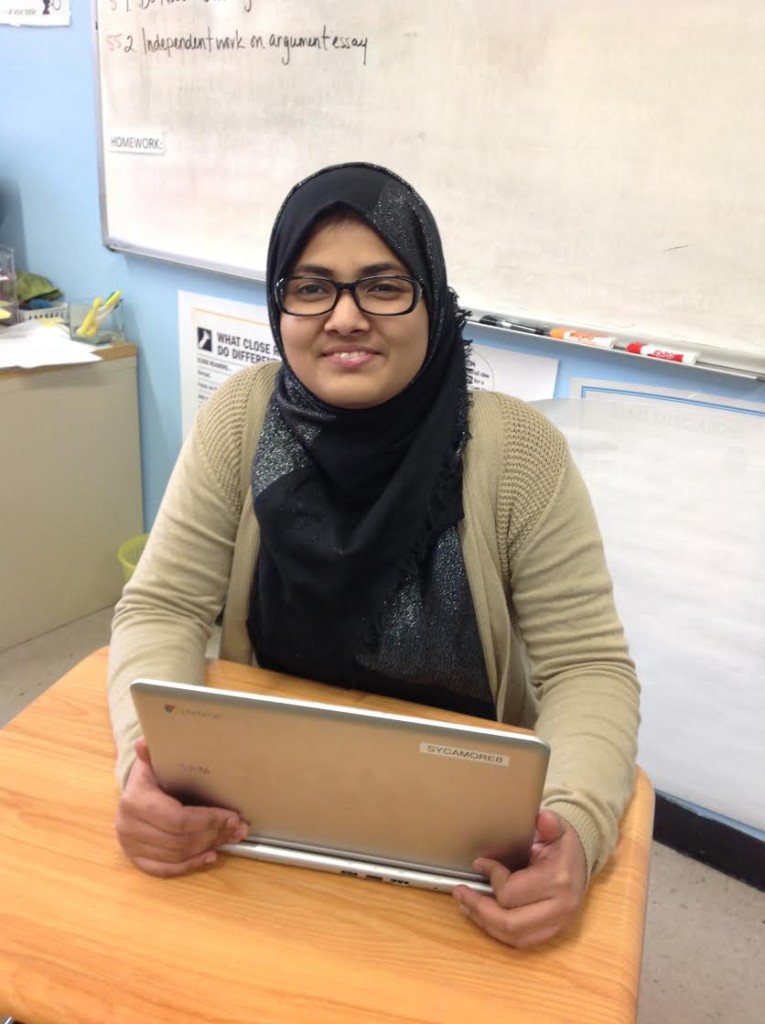 The students discussing Sold online attend International Community High School (ICHS) in the South Bronx. It is part of a network of 22 unique schools around the country intended for students who have recently entered the United States.

Jane Higgins, director of the NYC Writing Project, said students attending ICHS in the South Bronx experience nearly every obstacle a young person might face living in concentrated poverty while also contending with varying degrees of English literacy. Some students have been in the United States for up to four years, but others are far newer immigrants. More students arrive each week. Most are from the Caribbean, Mexico, and Central America, and some entered the country unaccompanied and undocumented.

In 2014, ICHS faculty saw a need to ensure that despite their students’ limited English and literacy skills, young learners at ICHS could take advantage of the educational opportunities online tools afford. Because many of their students lack internet and computer access at home, teachers grew concerned that their students could be left out of the literacy-rich online environment most of their peers inhabit.

So in 2014, the New York City Writing Project partnered with four teachers at ICHS to apply for an LRNG Innovation Challenge Grant to extend opportunities for student-driven online writing projects through the Youth Voices platform.

The LRNG Innovation Challenge grants stem from a partnership between the National Writing Project and John Legend’s Show Me Campaign to help educators extend time and space for connected learning.

After receiving the grant last year, ICHS teachers and students, and two NYC Writing Project teacher-consultants, came together in six afterschool workshops over six weeks as students extended their classwork by writing posts for authentic audiences. After learning more about Youth Voices in the workshops, Nick Deming, an English Language Arts teacher at ICHS, decided it would be the perfect platform for discussing Sold, and he prompted students with questions that kick-started a rich conversation.

Because teachers of English-language learners have a lot to balance, Higgins said, it was important to present Youth Voices as a curriculum that teachers could use rather than as just another layer on top of existing work. Higgins said the benefits of a Youth Voices-based curriculum go beyond just providing access to technology and the internet. Educators at ICHS also used it in classrooms to expand opportunities for connected learning—learning that lets students experience people, places, and things beyond school walls.

That approach worked during the discussion about Sold, as students weighed in on one another’s posts, adding depth and emotion to the conversation. A student named Cristina, for example, wrote: “As you say, ‘Human beings have the capacity to survive almost anything.’ I do agree, we always find a way to get over our problems, but I think that life is not only about moving on it’s also about justice and equality.” 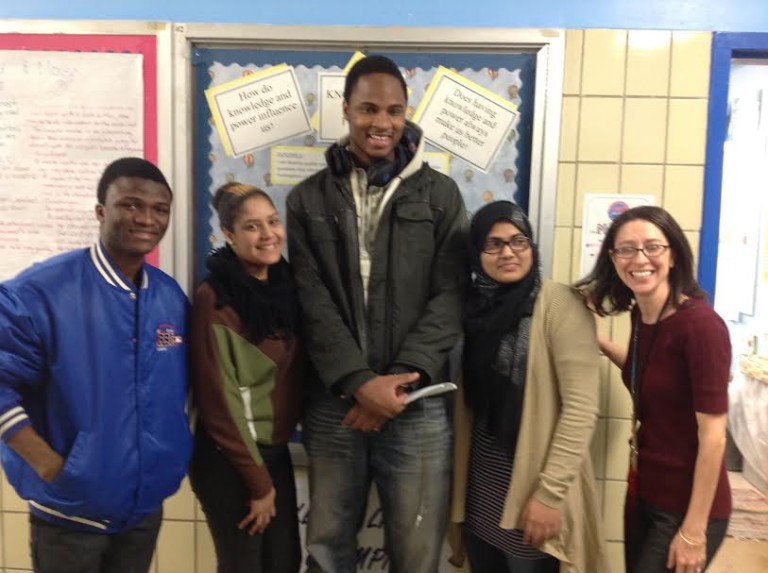 “Youth Voices is not for word processing,” Higgins said. “It’s about helping students see beyond the window they look out.”

Opening new opportunities for that type of connected learning, she added, is important in ELL classrooms, where, because of students’ limited English skills, it can be challenging to move away from teacher-centric curriculum models.

“The introduction of Youth Voices attempts to break that down again,” Higgins said. “Suddenly, you have this vehicle that supports students to speak to one another, access language on their own, and engage in learning without it needing to be teacher-centered.”

Teaching in a Movement for Justice

By Paul Allison
This collection of blogs, podcasts, articles, videos, and other media provides a variety of textual experiences you could use to give students a layered reading and writing experience related to Ferguson and Black Lives Matter. The collection creator, Paul Allison, poses two qustions: "How can we help students to connect around important issues of race and justice in our time?" and "How do we build curriculum, rituals, tools, and skills in modular, open, inspiring ways that will give students the permission to follow their passions, yet also invite them to go deep into important issues as committed and informed citizens?" While the collection focuses specifically on the death of Michael Brown in Ferguson, Missouri and its aftermath, it underscores the value of creating multimodal resource collections to encourage teachers and students to explore issues of social justice locally and more broadly.
Read more

By Yumi Matsui and Clifford Lee
This inspiring video documents how an English and a history teacher collaborated to have their high school history students created digital stories as part of the American Immigration Project. The semester-long multimodal project incorporated interviews, transcription. discussion, writing voiceover scripts, and digital production. Composing images and audio to create powerful presentations, students shared their stories at a final Exhibition Night screening. Teachers interested in project-based learning will find inspiration as well as practical strategies in the related resources.
Read more