Back to Rural Voices Radio

Rural Voices Radio, Volume I comprises six audio programs created by six Writing Project sites as part of the Rural Voices, Country Schools program. Each episode paints a portrait of a rural school, as told by the students and teachers themselves, and celebrates what's "genuinely good, genuinely rural" about America's rural schools. 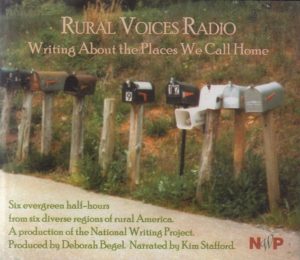 Rural Voices Radio I: Writing About the Places We Call Home, released in June 2000, transports listeners to the unique and diverse landscapes of rural America through the original writings of students and their teachers in the six Rural Voices, Country Schools sites. Each site’s program is distinctive—from Louisiana’s bayous and crawfish to the arid hills of Moses Lake, Washington—the CD anthology offers a glimpse of the countryside and celebrates what’s genuinely good in America’s rural schools.

Building on the Rural Voices, Country Schools theme of bringing student voices and student writing to the public, NWP released the CD set to public radio stations across the country. The response to the programs overwhelmingly positive. Now, they are available to stream and download on our Soundcloud channel.

This post is part of the Rural Voices Radio collection.