Christina Puntel of the Philadelphia Writing Project explains how she and her students practice ‘generous listening’ in preparation for maintaining ‘adventurous civility’ while participating in the 3D Digital Democratic Dialogue Project. Included are relevant news and resources.

Ain’t got no hair on my tongue

Got no reason to run

Yeah, my words are the reasons that I’ll never use guns

I just wanna have fun and to live without fear

I keep my speech on fleek while these bitches fake deep

You don’t practice, you preach

I get applause when I speak

It’s a difference for me, people coming for me

They take advantage of me, and I’ma put them to sleep

Nokia raps about the power and fleekness of her language, the choice to claim a year where she could live with integrity by putting the “ground to the ear,” and the importance of reflecting honestly with others so they “regret how they be.” In many ways, last year our Journalism class at Carver experienced the 3D project as an exercise in both “having fun and living without fear,” and working hard to keep our “speech on fleek” to show youth in other cities what needs to change.

The ecosystem of our 3D project is populated with rich experiences connecting young people in Philadelphia, where I teach Journalism with 10-12th graders, to other youth in Aurora, CO, Coppell, TX, Oak Park, MI, Yreka, CA, and Anchorage, AK.  As I am writing this, Trump has been in office 2 years, 213 days, 9 hours, 57 minutes and 48 seconds.  For many in my community, and in particular as a journalism teacher, this era of white supremacy in the White House marks a new low for democracy.

Entering the 3D Project, I knew my students would have a different experience of government and society and civics than others around the country. It was important for the teachers in the project that we frame the ways we approached each other carefully, since we knew our differences were going to be stark. From the beginning, we all decided to make use of Krista Tippett’s On Being resource (thanks, Molly!), Grounding Virtues.

When we dug into the Grounding Virtues, we noticed that keeping our speech on fleek is the same thing as using words that matter, a virtue that reminds us that “as technology reframes the meaning of basic human acts like making and leading and belonging, the world needs the most vivid and transformative universe of words we can muster.”  Putting our ground to the ear is the practice of generous listening, described in Tippett’s resource. And Nokia’s urge to “show them the heat so they regret how they be” can be framed as adventurous civility.  “The adventure of civility for our time can’t be a mere matter of politeness or niceness. Adventurous civility honors the difficulty of what we face and the complexity of what it means to be human.”

To strengthen my students and I for experiences of digital democratic dialogue with others in the 3D project, we grappled with big ideas and investigations in class, face to face. In the national news, from September to November in 2018 alone, we were confronted with questions about what happens when obscene power is confronted with the truth. The Serena Williams cartoon. The Kavanaugh hearings. The Cosby verdict.  Julie Brown at the Miami Herald published a scathing investigation into Jeffrey Epstein, Perversion of Justice.  Teachers need to take time to find out what the scars look like on our students’ lives when the “strange fruit” that was always there, appears on homepages.  As teachers, we may not always recognize the presence of this “strange fruit,” but the rotten stench is unbearable and becomes unmistakable once we learn to smell what our students smell. 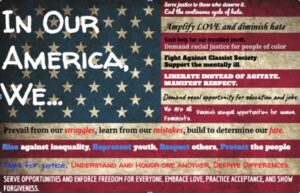 Questions surfaced, and when questions surface, mentors in the field are vital. My dear friend Lauren FitzPatrick, from the Chicago Sun Times, helped us brainstorm questions… What is truth? What is the role of truth in keeping democracy going? How do journalists “get at” the truth? When something is unjust is it also untrue? How does our place, where we are from, influence the truth? As my journalists at Carver searched for the truth, they also faced many times when their search for truth was met with– nothing. As my students got closer and closer to the truth about structures of power, no one called back for interviews. The Freedom of Information Act documents they requested were all redacted. Their emails to District personnel and others were left unanswered.  It is not a coincidence that the young journalists in my class we roundly dismissed by adults in power. Trump and his enablers target journalists, especially Black journalists, and media institutions daily from the New York Times to Fox News.

However, in our experiences with the 3D community and with some others through the year, my students also had many experiences of being seen, heard, and welcomed to the table.  Adults may not yet be ready to engage in honest civic discourse with youth about what’s important today. But, it turns out, youth are ready to be there for each other in the quest for fleekness of language and adventurous civility.

Over the next couple months, you will read stories from me here about times when my students’ quest for the truth, and “for a life of fun and to live without fear,” was ignored as well as times when their quest to listen and learn about the truth from each other happened.

Photo: Image of the American flag we created the first week of school

Climate Change, Controversy, and Conversation in the 3D Project

By Mary Richards
Mary Richards of the Alaska Writing Project becomes more civic minded alongside her students after participating in the 3D Digital Democratic Dialogue Project and finds herself asking questions of responsibility and tactics regarding the teaching of subjects as controversial as climate change.
Read more

Creating Generative Dialogue One Civil Conversation at a Time

By Molly Robbins
Molly Robbins of the Denver Writing Project offers students a road map to have hard conversations with people with whom they fundamentally disagree. After working on civil conversations and participating in the 3D Digital Democratic Dialogue Project, some of her students of color were empowered to speak at a professional development day for teachers, creating a powerful experience that shifted the conversation toward creating a more generative space where students feel included in their education.
Read more

By Nicole Mirra
Nicole Mirra shares the three iterative design cycles of the 3D Digital Democratic Dialogue Project that were aimed at encouraging students to move through a development progression of defining themselves as civic actors, engaging with other young citizens from across the U.S., and imagining their collective civic futures. Included are examples of student interaction and creations.
Read more