In this collaborative conversation between former middle school teacher and current National Writing Project site director Troy Hicks and third-grade teacher Franki Sibberson, they consider a range of teaching and learning practices that “guide students to consider themselves multimodal text-makers who combine words, images, sounds,and gestures” as they compose. In the process, they consider key issues related to writing and technology, including redefining "text" and assessing digital writing. A link to the audio of their conversation is included. 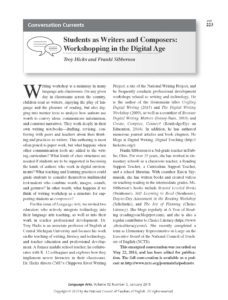 Download “Students as Writers and Composers: Workshopping in the Digital Age”

“I used to have a big binder for storing whatever I found throughout the year that could be a great mentor text. Now I feel like I’m using Pinterest and favoriting Tweets when I see a video or blog post or something that might lend itself to real study with kids who are eight years old. Troy, you mentioned looking at what kids are interested in, and my students are all about those rainbow band bracelets. I wanted them to look closely at some of those how-to videos on YouTube, so I did all my usual teacher moves on how to study a mentor text. We looked at some other favorites, too. I realized that they knew those videos so much better than I did because they already had a handle on the best people to watch on YouTube for making bracelets and who not to watch. They had studied certain videos as a reader. It was a really different role for me to take on, to just ask them the right questions to determine which craft moves the stronger videos had. They knew those videos so well; they had watched them so many times. I started from scratch like I used to do in my units of study, but they didn’t need that. They knew the videos better because, like you said, there was something in them that caught their eye.

So I’m relying on my kids a little bit to identify mentor texts, like you mentioned, Troy. But I’m also realizing that in some cases, they may have watched this video 42 times to make this bracelet. So I’m realizing that they know it really well, and I’m trying to build on that, too. Even at eight years old, they know who they want to follow on YouTube and who does not produce such a good how-to video. They’ve made those decisions as readers, and it’s just a matter of transferring that to ‘What does that mean for you as a writer, then?'”

Listen to the Conversation

Hicks, Troy, and Franki Sibberson. “Students as Writers and Composers: Workshopping in the Digital Age.” Language Arts 92:3 (2015) 223-230. Copyright ©2015 by the National Council of Teachers of English. Reprinted with permission.

By Troy Hicks and Kristen Hawley Turner
Calling for reflection upon and critique of how technology is typically used in schools, authors Hicks and Turner caution that technology in the classroom cannot be viewed simply as an add-on, but must instead be used to cultivate distinctly digital literacies, inviting students “to critically consume information, to create and share across time and space, to co-create and collaborate to solve problems.” Providing a list of tech do's and don'ts, they call on teachers to "audaciously" advocate for greater cultivation of genuine digital literacy.
Read more

Because Digital Writing Matters: A Conversation with the Authors

The NWP book, Because Digital Writing Matters, examines what teachers, administrators, and parents can do to help schools meet the challenges of digital writing and to equip students with the communication skills they need to thrive in an information-rich, high-speed, high-tech culture. It provides a roadmap for teachers and administrators who are implementing digital writing initiatives in their classrooms, schools, and communities. In this interview, the authors look at what educators, parents, and policymakers can do to help equip students with the technology-related communication skills they need to thrive in school and in the global workplace.
Read more