This NWP monograph from leaders of the Saginaw Bay WP (Michigan) takes a deep dive into a districtwide approach to teacher-led study groups that resulted in significant changes in teacher practice and student learning as well as leadership development among teacher facilitators. The appendices include study group schedules, facilitation guides, evaluation tools, etc. Teacher leaders developing and facilitating school-based study groups will find that this offers a wealth of useful resources. 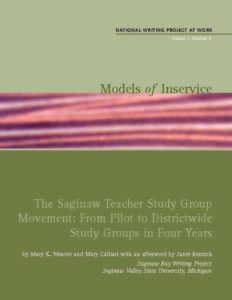 In June 1996, the staff of Webber Middle School in Saginaw, Michigan, the seventhpoorest city in the United States, gathered for its year-end staff meeting to hear the results of the seventh grade reading scores for our state assessment test, the Michigan Education Assessment Program (MEAP). Having worked hard that year, the staff was sure the scores had improved. When Joe Miller, assistant principal for curriculum, announced that Webber’s seventh grade scores1 were 10.9 percent pass and 89.1 percent fail on the informational text section of the criterion-referenced state reading test, there was total silence; the staff was devastated! Mary K. Weaver, a teacher at Webber, was determined to take reform action in response to Webber’s low test scores. That single action would have ramifications throughout the district for years to come in the Saginaw Teacher Study Group Movement.

This monograph covers the Saginaw Teacher Study Group Movement from its inception in 1996 through its expansion to include the overwhelming majority of Saginaw teachers in 1999–2001. Since 1996, classroom teachers in Saginaw have been volunteering for study groups addressing the learning and teaching of students in poverty. In the first half of this monograph, Weaver tells the story of one of the first Saginaw study groups and how, over time, studying literacy resulted in significant changes in teacher practice and student learning, development of a literacy program and literacy curriculum, and higher test scores at the school. The Webber Middle School story is embedded in a larger districtwide movement of similar voluntary teacher research groups, some site specific, some across schools, but all teacher designed and facilitated, each taking on a challenge and approaching it with an inquiry teacher research stance.

In the second half, Mary Calliari, who along with Weaver and others designed and started the first study groups in 1996, picks up the story three years later when she facilitated a study group that met in 1999–2000 and successfully changed the district reading curriculum. Calliari also recounts how her involvement in the study group movement led to her development as a local teacher-leader after twenty years as a classroom teacher. Weaver and Calliari conclude this piece reflecting on what they have learned and offering advice to others interested in starting and maintaining voluntary teacher study groups that take an inquiry stance on an issue of their choice. In an afterword, Janet Rentsch, co-director of Saginaw Bay Writing Project, offers a site director’s perspective, focusing on the collaboration among the Saginaw Bay Writing Project (SBWP), Saginaw Public Schools, and Saginaw Valley State University.

Planning for Study Groups: An Advanced Institute at the NWP in Vermont

The Work Will Teach You How to Do It: A New Director Learns How to Begin and Grow Inservice

By Sally Crisp
In this case study, the author reflects on how her writing project site moved from an inservice neophyte to a partner in several multiyear programs with local schools. She raises dilemmas (such as: Are we ready to do this? If the PD we offer isn't perfect, will we ruin our name/reputation? Who should we contact?) and shares strategies for confronting them. As the title suggests, the director and teacher leaders in Little Rock learned how to do the work by doing the work, and this case study would be a great read and tool for other sites who find themselves taking a leap into new partnerships.
Read more