Two developmental psychology scholars break down the beginnings of young children's writing, with links to relevant research. This article could be useful for early childhood educators seeking to learn more about emphasizing writing in their literacy instruction, or aiming to advocate for the importance of early writing. 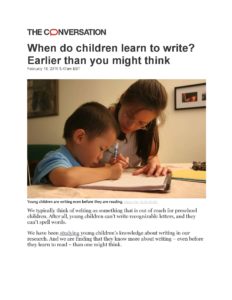 We typically think of writing as something that is out of reach for preschool children. After all, young children can’t write recognizable letters, and they can’t spell words.

We have been studying young children’s knowledge about writing in our research. And we are finding that they know more about writing—even before they learn to read—than one might think.

Writing Is Smaller Than Drawing

Consider this production by a two-and-a-half-year-old American child, Sophia:

Sophia identified the large circular portion on the right as a drawing of a circle. She said that the portion with small squiggles on the bottom and near the left was writing. Sophia’s writing did not use recognizable letters, nor was she spelling any specific word. 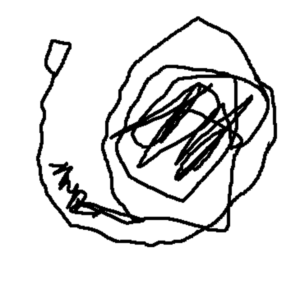 Research has supported what the example from Sophia suggests – that children as young as two or three years of age already know about some of the basic differences in appearance between writing and pictures. They try to reproduce these differences in their own attempts to write and draw.

Consider a study in which Chinese children were asked to write several words, such as “sun,” and also to draw pictures of those same things. Two- and three-year-old children’s attempts to write characters were far off the mark, bearing little resemblance to the correct characters.

However, children’s writings tended to be smaller than their drawings. The writings were also less curvy and more angular, angularity being a property of characters in Chinese.

Not only did children make different sorts of marks when writing than when drawing, they also chose different implements to do so. Specifically, children would often choose dark pens or pencils to write and colored crayons to draw.

The adults found the task to be difficult, which is not surprising. However, they performed better than would be expected by random guessing even with the productions of two- and three-year-old children.

Clearly, children were doing something different when writing than when drawing—different enough that adults could even detect some of the differences.

Young children may know that writing generally looks different from writing, but the next question is: do they have any understanding that it functions differently?

One important property of writing is that it represents a specific word in a specific language. The written word “rabbit,” for example, stands for the spoken word “rabbit.” It would not be appropriate to read this word as “bunny.”

In contrast, we can look at a picture of a rabbit and say that it is a rabbit or a bunny or an animal – any one of these labels, or others, would be considered correct.

In a recent study, we examined children’s knowledge of this important difference between writing and drawing. The children in the study ranged from three to five years old, and they were not able to read words themselves. A researcher would show a child a written word such as the word rabbit and would read it to the child.

Later, when a puppet employed in the experiment read the word as “bunny,” many children picked up the mistake. In a similar task with drawings, children were more likely to say that the puppet was correct in using the alternative label.

The different results in the writing and drawing tasks suggest that young children have some understanding that a written word stands for one specific unit of language in a way that a drawing does not.

They are beginning to understand that, while a written word should be read the same way each time, it is sometimes appropriate to use different labels for a drawing. Importantly, children begin to acquire this understanding even before they can sound out words themselves.

Parents and teachers sometimes dismiss children’s early productions as scribbles—signs of a lack of knowledge about how to write and how to draw.

The research we have reviewed, together with other findings, shows that children begin to learn about some of the visible distinctions between writing and drawing from an early age. Our research shows that from a surprisingly young age, children have some knowledge about what writing looks like and how it functions. That is, young children know more about writing than we might think. There is more to their scribbles than meets the eye.

Preschool teachers and parents can build on the knowledge that children have. If we know what to look for, we can acknowledge what children already know, for example by saying, “You did a good job of writing on a line here.” This can help children advance to the next step.

Rebecca Treiman is the Burke and Elizabeth High Baker Professor of Child Developmental Psychology at Washington University in St Louis.

Lori Markson is an Associate Professor of Psychology at Washington University in St Louis.

This article is republished from The Conversation under a Creative Commons license. Read the original article.