Have you ever found yourself having to justify teachers’ writing as a key, non-negotiable component of your site’s professional development? If so, this article can help ground you in the importance and value of the act of writing. Yagelski proposes a pedagogy of "writing as a way of being" and describes how the approach can encourage awareness, reflection, and inquiry in ways that product-focused approaches may not. Yagelski’s full vision--that writing is more than communication, and that our lives and thinking live within writing--will be helpful to any teacher inquiry group or educator/leader teams who are working together to construct their own philosophical stance about writing: what it is, what it does, and what it should look like in classrooms. This piece will also be an invaluable resource for any teachers needing to justify the practice of having students write without being directly tied to the day’s objective, goal, or standard. 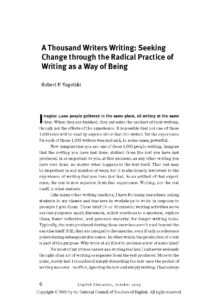 Download “A Thousand Writers Writing: Seeking Change through the Radical Practice of Writing as a Way of Being”

For most of my 25-year career as a writing teacher, I had never seriously thought of an act of writing as separate from the text produced. More to the point, rarely had I considered simply discarding the text once the period of writing was over—in effect, ignoring the text and simply writing. I had always assumed, like most English teachers I know, that writing should produce a text to be used for some explicit purpose—to keep a record, promote learning, communicate ideas or information, or demonstrate writing ability (as in the context of assessment).

It was not until I attended the opening session of the National Writing Project’s annual conference in 2004 that I began to consider the experience of an act of writing as separate from—and as valuable as—the text produced as a result of that act of writing.

Some 1,000 educators from around the United States gathered in a hotel ballroom in Indianapolis, and they were writing for its own sake. As the new director of a National Writing Project site in Albany, New York, I quickly learned that almost all NWP events, whether local or national, large or small, begin with writing. And almost never is the purpose of that writing to produce a text to be read or used by someone other than the writer. We write—together—for other reasons, because writing as an activity matters, separate from any text that is produced.

In that Indianapolis ballroom, writing was in fact an act of being, an intense awareness of ourselves in that moment: 1,000 individuals writing, together, in a moment in time and space. In this sense, writing is a potentially powerful vehicle for transformation, for it opens up possibilities for awareness, reflection, and inquiry that writing as an act of textual production does not necessarily do. Writing in the moment, I have come to realize, has the capacity to change us.

Hey Matt! There's a Reason We Write Like Every Day!

By Molly Toussant
Students often wonder why they have to write every day. In this piece, with her students as her audience, one teacher outlines and then elaborates the beliefs that guide her teaching of writing. Points of use for this article may be early in summer institutes or school partnerships to guide teachers in examining their own beliefs about teaching writing as well as the value of making their beliefs more transparent to learners. This article may also be ideal for engaging community partners, parents, or administrators in discussions about the work of teachers who teach writing.
Read more

Beyond Strategies: Teacher Practice, Writing Process, and the Influence of Inquiry

By Anne Whitney, Sheridan Blau, Alison Bright, Rosemary Cabe, Tim Dewar, Jason Levin, Roseanne Macias, and Paul Rogers
A key reading, this award-winning research study may serve equally well as the focus for a group studying writing process pedagogy or for teacher leaders developing and leading a professional development program. Based on two contrasting case studies, the overall study provided evidence for the importance of inquiry in transforming teaching practice and student performance. While each teacher discusses how she interpreted and implemented a process-centered theory of writing, the comparative data suggest that inquiry-based inservice may lead to more nuanced thinking about teaching writing and increase a teacher's sense of responsibility for improving curricula and interrogating her own practice. The study also includes detailed descriptions of the inquiry-based professional development in which one of the teachers participated.
Read more

Writing As a Mode of Thinking

By Danling Fu and Jane Hansen
What’s missing in writing instruction that focuses on organization, vocabulary and sentence structure? What is the role of thinking in writing, and how can we make thinking visible in writing? This article, which could provide a useful focus for a study group or other professional development session, captures a discussion of writing as a mode of learning and the role that evaluation plays in writing across the disciplines.
Read more
Log in or register to bookmark your favorite content
You'll be redirected back here after logging in or registering.
Log in Register