In this short article, Mary Ann Smith describes a session she attends with several veterinarians who have brought their case studies to a group of their colleagues for response. Comparing their practice to that of teachers sharing student work, Smith reflects upon the foundations of a powerful approach to collaborative teaching and learning that cuts across professions. Engaging and accessible, this piece could easily be read by teachers in an introductory workshop session or study group.

It’s 7 a.m. I am sitting with my friend Char among a dozen veterinarians, half of them brand new to the profession and half of them experienced with specialties like cardiology. Char and I have begged our way into the once-a-week gathering of this small veterinary office. We are the only outsiders. Char works at the California Department of Education and lives in the neighborhood. I have driven to Sacramento from Berkeley, curious to see what veterinarians teaching veterinarians looks like. I suspect that the writing project can learn from the dog and cat profession. 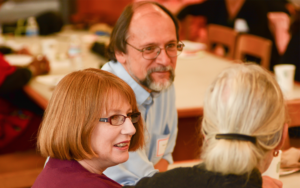 The group assembles around a large table, shoving bags and books underneath. After a short scramble for coffee, the session begins. Someone, presumably one of the veteran vets, asks, “Who’s got a case to present?”

A young woman responds without a moment of hesitation. “I’ll go because I need help on this one.” She pops an X ray of a cat into a lightbox on the wall. The cat, she explains, has an abscessed tooth. The owner wants the tooth removed immediately, having decided it is the cause of the cat’s malaise. However, the novice vet points to an enlarged heart that shows up on the X ray. Would surgery be dangerous?

The other doctors do not jump in to answer her question. Rather, they keep her focused on the X ray, on teasing out what she sees and what it might mean. They listen while she describes how she has handled the situation so far. Only after she has reached the limit of her practical knowledge do they confirm her hunch. “You have to take care of the heart failure first. Treat for the treatable right now.” They also give her advice on how to handle the owner who wants the quick fix. “Tell him the cat will not survive if the tooth comes before the heart.”

I can’t help myself. I imagine a piece of student writing in place of the shadowy cat. Surrounded by supportive colleagues, a teacher presents the case: brief background on the student and brief description of the events and intentions that led to this piece of writing. Then, a collective look at the student work. At any point in my teaching career, I would have leaped at the chance to unravel a tangled piece of writing in the company of peers.

It takes a little over an hour for the veterinarians to offer each other four cases. The last one is the saddest. A nine-year-old dog has a lingering cough that the vet treats with penicillin. After several days, the owner and the dog drag into the office, both completely worn out. Now the dog has a loud heart murmur signaling pulmonary edema. The vet prescribes a heart medication. More days pass until the owner frantically calls, insisting that the dog has fear in his eyes. The young vet is at a loss. She tries to reassure the owner, offering another prescription. The dog lives another day, and then the owner has him put to sleep.

Everyone at the table is momentarily quiet. Clearly, there is no stigma in bringing up a “failure.” On the contrary, this case raises questions that seem to be universal in the world of veterinarians. What do you say to pet owners so they make the right decisions? How do you help owners when they become overwhelmed? For, as one of the group points out, “This client needed sleep and a break. One possibility would be to say, ‘Let us treat the dog for a night or two.’”

In my mind, I substitute the word parent for owner. I think of how teachers have to help parents remain patient as their children learn to read and write. I remember parents whose complaints I did not know how to answer. What if I’d had this way station where I could check in with the ups and downs of teaching?

In fact, I notice that all the veterinarians’ cases, while primarily about medical issues, raise other concerns as well. For example, one of the experts presents a perplexing case of a dog whose skin was severely burned after a routine surgery. As it turned out, the post-surgical attendants had placed an electric heating pad, rather than a hot-water bottle, under the dog. The case opens lessons beyond the use of equipment. One of them gets an immediate airing: “If something goes screwy, own up to it with the client.”

From where does the motivation come for these early morning gatherings, I wonder. The vets belong to an animal medical group with nine hospitals, similar to a school district. According to Char, who knows one of the vets, there exists a we’re-all-in-this-together feeling in the medical group. Even more enlightened are the administrators who believe it takes a long time to hone one’s craft. Hence the support for professional development for everyone.

But what really stands out is the apprenticeship I witnessed—professionals at all levels of experience and expertise willing to make decisions together, to freely admit, “This is new to me,” and to tackle problems without placing blame. For new teachers in particular, this no-fuss-no-muss model—one that could reside right in their own schools— might provide not just immediate answers, but the habits of mind and associations that make a teaching career possible and attractive.

The entry of so many new teachers into the profession gives the writing project a particular responsibility, one that the National Writing Project (NWP) is now preparing to address with its increased federal financial support. Even without additional funding, some NWP sites are planning and conducting special institutes and programs for the next generation of teachers. The question is what kind of sustained professional development will be most useful to our colleagues who are just entering the profession?

Sitting among veterinarians reminds me that professionals in other fields look at each other’s work from the very beginning of their careers. They also learn from the get-go to present cases as a way to learn from one person’s experience and from a shared interpretation of that experience. And they have extended the notion of apprenticeship from a pairing of novice and veteran professionals to a heterogeneous group, the members of which have a stake in the way each individual and each workplace serves cats, dogs, and humans.

As the writing project moves rapidly into new-teacher initiatives, we might benefit from considering models like this one that are especially well suited to supporting not just the newest among us but also the most senior—those who have earned, at the very least, a stimulating, relevant exchange about teaching.

By Mary Weaver, Mary Calliari, Janet Rentsch
This NWP monograph from leaders of the Saginaw Bay WP (Michigan) takes a deep dive into a districtwide approach to teacher-led study groups that resulted in significant changes in teacher practice and student learning as well as leadership development among teacher facilitators. The appendices include study group schedules, facilitation guides, evaluation tools, etc. Teacher leaders developing and facilitating school-based study groups will find that this offers a wealth of useful resources.
Read more

This protocol from the Hudson Valley Writing Project takes teachers through the steps of looking at student work in a professional development session. The accompanying script helps a facilitator to guide participants through the “turns” in the protocol process. Adapted from the Prospect Center Descriptive Review Process and the National School Reform Faculty Appreciative Inquiry protocol, this resource allows participants to name what students have accomplished before making recommendations for next steps. Rather than focusing on deficits, it offers an additive model for reviewing student work.
Read more