This inspiring story of Floris Wilma Ortiz-Marrero, a teacher-consultant with the Western Massachusetts Writing Project and 2011 Massachusetts Teacher of the Year, describes how she became a vocal advocate for her ELL students in a time when the state made it illegal to teach students in their native language. In addition Ortiz-Marrero's story, there are several important resources referenced and linked within the article. This article and the related resources would be a great starting point for teacher discussion groups focused on the ethics of ELL and/or bilingual education and legislation. 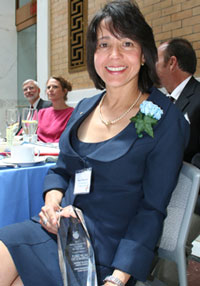 Floris Wilma Ortiz-Marrero is the first ELL teacher to win the state’s teacher of the year award.

“She told me I’ll be a doctor or astronaut or—both,” said 13-year-old Takuto Kimura at a June ceremony in Boston honoring Floris Wilma Ortiz-Marrero as the Massachusetts 2011 Teacher of the Year, the first ELL teacher to receive that recognition.

The young Kimura, who now speaks English with confidence, arrived from Japan three years ago in Ortiz-Marrero’s classroom at Amherst Regional Middle School not knowing a word of the language of his new country.

His progress is not an anomaly, says Amherst principal Michael Hayes. According to Hayes, Ortiz-Marrero, who has been a teacher-consultant with the Western Massachusetts Writing Project since 1997, runs a “classroom [where] you will find a nurturing environment that is filled with high expectations for the students.”

Ortiz-Marrero credits the Writing Project with pointing her in the direction that has led to her current recognition. “When I talk about my leadership role, I always begin by giving all the credit to the Western Massachusetts Writing Project. They saw in me what I could have never seen in myself—a teacher-leader whose experience as an ELL teacher they valued.”

It was at the Western Massachusetts Writing Project invitational summer institute that Ortiz-Marrero, who is from Puerto Rico, met the woman who was to become her colleague in many projects, Karen Sumaryono.

“We cocreated, co-led, coauthored articles, and copresented at local state and national conferences. This is what attracted me to the Western Massachusetts Writing Project. The collaborative collegiality that permeated everything we do resonates with my cultural background. It is about the work of teachers teaching teachers; it’s not individual work.”

To a degree these programs were the product of necessity. In 2002, Massachusetts passed the English for the Children ballot initiative that made it illegal to teach children in their native language.

“Students who had not mastered English were coming into mainstream classes much sooner,” says Penniman.

Much of what she taught teachers wasn’t complicated. She encouraged them to speak slowly, paraphrase confusing material, and allow groups of students to draw pictures to illustrate new vocabulary words.

But she also found creative ways for students to use their first language in her classroom. For instance, she encouraged them to use their native languages when prewriting.

She also understood the importance of encouraging students to preserve their cultural identity as they are learning in English. In an article she and Sumaryono published in the May 2004 edition of Voices from the Middle, Preserving the Cultural Identity of the English Language Learner, she describes a mini-geography lesson in which students point to their country of origin on a world map. She also suggests teachers honor first languages by using different languages to illuminate key words in a lesson.

She knows that working with ELL students is a challenge for both the student and teacher. In working with English-speaking teachers she will present—all in good humor—an entire science lesson in Spanish, helping the teachers better experience what their students are going through as they make the effort to grasp their lessons in a tongue foreign to them.

But in receiving the Teacher of the Year recognition, Ortiz-Marrero was being honored as much for her character as for her innovative ideas.

Principal Hayes told the Boston gathering, “She is deeply committed to underrepresented populations and helps keep them central in our thinking.”

He described how she visits students’ homes and gives them rides, and how she connects with all colleagues, parents, and students. “She’s a bridge builder,” he said. “She keeps faculty discussions positive.”

These are talents that Ortiz-Marrero will very much need to call on as she begins her work as Teacher of the Year. While she will remain in her classroom, she will also be expected to “speak for and energize the teaching profession and represent the positive contribution of teachers statewide.”

Ortiz-Marrero sees her new position as a chance to “make visible the work of my colleagues and make a strong statement that students are not empty vessels waiting to be filled. They possess a wealth of knowledge, experiences, and literacies that oftentimes are not congruent with the school’s expectations.”

Words like these support Penniman’s claim that Ortiz-Marrero “has been known to speak truth to power, but always in a respectful way.” She admits to being an emotional person who occasionally needs to curb her enthusiasm to be effective.

But her student Takuto Kimura, for one, has no problem with this enthusiasm: “She just hugs everybody. Big hugs. It makes us feel good. We can’t be sad with her.”

By Carol Booth Olson, Robin C. Scarcella, Tina Matuchniak
In this chapter from Helping English Learners to Write, the authors explain the critical role of narrative writing in helping English learners develop their English language skill and succeed in English Language Arts coursework in the secondary grades. Building upon a strong research-based rationale for narrative writing, it provides many specific and effective teaching strategies that would be useful for middle/high school teachers. In addition, this chapter would be of interest to teachers beginning inquiry projects.
Read more

By Great Valley Writing Project
This Ning, a social website/blog developed and maintained by several teacher leaders from the Grand Valley Writing Project in Central California, focuses on issues related to teaching English Language Learners. Sites and teacher leaders looking to maintain momentum after the conclusion of an institute or other extended PD opportunity would be well served looking at this site to see what is possible.
Read more

By Wilma Ortiz and Karen Sumaryono
How do we nurture intellectual curiosity, prepare students for a global economy, and validate and celebrate students' cultures, language diversity and multiple literacies in an era of accountability and high stakes testing? The authors offer suggestions for ways teacher leaders can be advocates for equitable education and promote responsive practices for all students in spite of pressure from language and educational policies. This article could be a useful piece to read as part of a professional development series or study group on assessment and English learners.
Read more
Log in or register to bookmark your favorite content
You'll be redirected back here after logging in or registering.
Log in Register