Bilingual third grade students acted as helpers to first graders in a collaborative writing workshop. The third grade teacher guided her students through a process similar to teacher inquiry--to reflect on their own experiences as writers in order to help the younger writers, to take notes on their experiences as teacher/tutors, and to carefully think through the problems encountered and results obtained in order to improve their practice. This article models three useful practices in a writing context: 1) students as researchers; 2) older students as tutors to younger; and 3) reflective practice in writing and teaching. 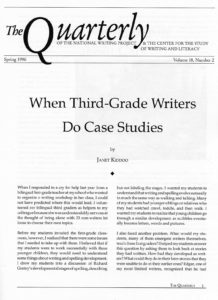 Looking back at my students’ notes a year after this experience, I found that these novice teacher-researchers had faced the same kind of problems and made the same kind of discoveries as their adult counterparts.

Like adults, the young researchers were sometimes dismayed by how little their students knew. “Yo aprendi que los ninos de primer grado no saven escrivir muy bien” (I learned that first graders don’t write very well), said Daniel, a very logical third grader. I responded with a plea for understanding. “Son muy jovenes!” (They’re very young!). And while it may have taken these third graders a while to adjust to these beginning writers, they also came to realize that their students made more progress when they were encouraged rather than criticized. Irma wrote, “[I did] not say anything mean because that would have made the first grader feel bad.” The mentors came to aprpeciate small steps: “Ya está mejorando poco a poco” (He is improving little by little).

Resources for Educators of English Language Learners: An Annotated Bibliography

By Judith Rance-Roney and Lynn Jacobs
With the goal of collecting “diverse perspectives in the field of teaching English language learners and to provide audiences with readings that will involve, inform, and inspire." Judith Rance-Roney and Lynn Jacobs created this 41 page comprehensive annotated bibliography. Of special interest to classroom teachers of English learners, teacher inquiry groups, and professional development leaders, this rich collection contains many direct links to the original resources.
Read more

By Judith Rance-Roney
How can teachers support English learners, including recent immigrants, in language acquisition while also investing all students in creating a classroom culture that encourages shared experiences, knowledge construction and the integration of resources that ELs bring? Judith Rance-Roney's answer was to create the Culture Share Club as an intentional learning community within the classroom. Rich descriptions of many effective practices with solid theoretical and research grounding makes this article a must-read for study groups, professional learning communities, or professional development.
Read more