For those new to facilitating teacher-research, this article provides insight into the process, specifically how teachers approach research, the potential for research to change teaching practice, and implications for teacher education. It's written as an introduction to a collection of research reports on the writing processes of students, grades one through twelve, and prepared by the participants in a teacher-researcher seminar. 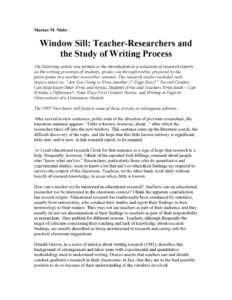 Download “Window Sill: Teacher-Researchers and the Study of Writing Process

Writing honestly about classroom problems, failures as well as successes, in a supportive atmosphere led to more self assurance and encouragement to change. The research logs, written under stress as they often were, in minutes between classes or during the times when the students themselves were writing, were honest writings, harsh sometimes, despairing sometimes. These writings and their authors were accepted by the other teachers and many found they shared the same problems. Teachers who avoided difficult questions about their teaching, who tried to avoid sharing their writings, were pulled up short by the other teachers in their response group. They would say to each other, “Maybe something else is going on. Have you thought about…?” Being honest with themselves and with each other seemed to enable them to change. It was a difficult triple whammy—observing, writing, and analyzing what happened in their classes—a strain, as it was repeatedly described. It was also liberating.

Developing a Definition of Teacher Research

By Marian M. Mohr, Betsy Sanford, Marion S. MacLean, Courtney Rogers, and Sheila Clawson
A group of experienced K-12 teachers and teacher-consultants from the Northern Virginia Writing Project engaged in teacher inquiry for several years to improve their teaching. The process and the findings from their research reverberated throughout their school system and influenced how their schools were run. This chapter provides a clear and detailed definition of teacher research, and will be useful both as a guide for those planning to facilitate teacher inquiry and as an introductory reading for teachers participating in their first inquiry project.
Read more

By Joe Check
How should teachers pro-actively respond to school reforms mandated from above? This article advocates for teachers to take the lead in determining how these reforms are best implemented at the school and classroom level through reflective inquiry practices. Specifically, the article covers three main lines of inquiry: 1) What effect is reform having on the climate for reflective practice in our school system? 2) What is the teachers' understanding of system-wide change? 3) Has the reform honestly acknowledged the social, cultural, and contextual barriers to students' academic success? These questions, and Check's discussion of them, offer great starting points for teachers to confront problematic mandated reforms in a professional development context.
Read more