Learn about in-depth reporting and how students can create their own in-depth story that explores an issue and provides an audience with detailed information about a specific, complex event or a broader societal concern.

Journalists report the events of the day. Many say that daily news stories represent the first draft of history. Often those first drafts can’t delve into the intricacies and ramifications of a news event. So enterprising journalists will dig deeper. They will interview more sources, who may raise questions that will require even more digging. Reporters might find their way to specific documents that will help illuminate the issue. Other previously published stories might add more background information. The reporter ultimately may conduct interviews with a single source that brings clarity to the entire issue. Once reporters have completed this extensive research, they will write their in-depth or investigative story.

The In-depth or investigative story will be a much longer piece than the original news story. It may be a story that will appear over several days in the publication. It will include information and quotes from sources, photos, videos, infographics, and data resulting from a survey. It may include sidebar stories that shine the spotlight on one specific aspect that works better as a stand alone piece.

Student journalists often compare the in-depth or investigative story to a research project, and essentially that works as a good description. Because of the time and effort required for this kind of reporting, student journalists in a class often feel most proud of this work that they have completed.

Keeping up with the Times

As reporting and presenting news continues to change, methods of presenting this research changes as well. Now many in-depth pieces will include multiple modes for presentation of information. If teachers encourage students to look for the best and multiple platforms for presentation of information, the in-depth story will have more appeal to an audience.

Many mentor texts exist that demonstrate this kind of inclusive journalism.

Snowfall: The Avalanche at Tunnel Creek

Over several months dozens of journalists at the New York Times worked to create this amazing and informative piece of journalism. Student journalists certainly won’t create something like this as they are learning how to develop an in-depth story. However, this piece shows them what is possible. It generates excitement for the in-depth project.

Teachers can use this PowerPoint slide presentation to give students more information: 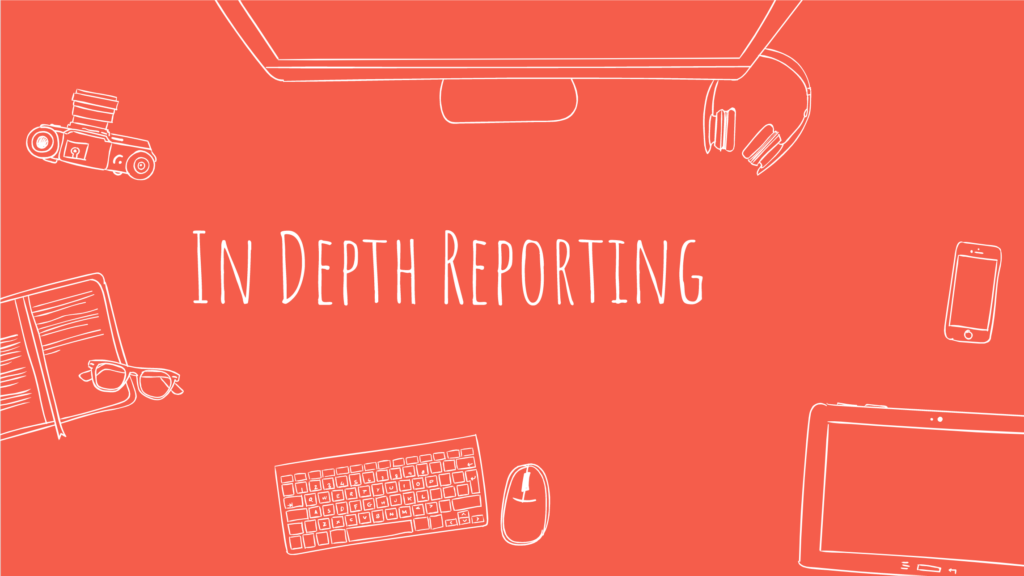 Create an in-depth story that explores a specific issue and provides an audience with detailed information about a specific, complex event or a broader societal concern.

Give them direction instead of directions.

Most in-depth reporting results from a team of journalists working together. Sometimes the team will be as expansive as what students see in the New York Times example. Sometimes the team consists of two people. In a classroom setting it probably is most feasible to ask students to work with a partner.

Provide students with a reasonable but aggressive deadline—two weeks minimum, three weeks maximum. I suggest a length of 5-7 pages.

Each team of reporters will have to divide the workload and conduct the research. They should conduct interviews with at least five sources; however, they can always interview more sources. They may include information from properly cited internet sources. Encourage or require students to create and administer a survey. Results often constitute authentic and new information.

The story should maintain a news perspective. Students are reporting the ideas and opinions of their sources. The reporters’ own opinions should not be part of the story.

Possible Lesson Topics for the Teacher

Encourage students to create a research plan that will identify the news issue, the targeted audience, its relevance to the lives of the audience, potential sources to interview, possible survey questions, problems they see starting out. Discuss the plan with each reporting team and offer questions and more direction that will help them get started.

Reporters working an in-depth story typically draw on sources they already know. They also might acquire new sources for this story. Trading information with sources can be effective (sometimes a symbiotic relationship generates more information for both sides). In-depth reporters may sometimes rely on “off-the-record” (unpublishable information) as a way to lead them to another source who will verify information. Try to avoid anonymous sources. If a source goes off-the-record, or the reporter promises anonymity, the reporter must honor those promises.

Select the source and then conduct background research on the source and the issue. Develop skillful questions to elicit the most information. Listen carefully to be able to pose followup questions. Allow the source to freely talk with open ended questions. Sometimes a reporter will bluff, hinting that they have more information than they do, which may lead a source to divulge more. Use what emerges from one source in interviews with subsequent sources.

Creating and Conducting a Survey:

Decide what purpose the survey should serve. Develop unbiased survey questions (this is harder than it seems). Many student reporters now will conduct surveys online. They also may survey students in class or other people they know. If they operate in this way, they will not be conducting a scientific survey, which is not really the purpose anyway. The survey introduces students to another method of gathering information. Because it is not scientific, they can’t draw broad conclusions. The way to deal with this issue is to reveal the info this way: 43 percent of those surveyed believe …. Because this is not scientific, it would not be accurate to say 43 percent of all people… .

Reporting teams approach writing the story in different ways. Sometimes a team of two reporters will write the story together, sitting shoulder to shoulder and laboring over each sentence. Most often, though, each reporter writes separate parts of the story. One reporter then acts as the lead writer and works to synthesize the separate pieces so the style and voice remain consistent. Each member of the team should work collaboratively, though, to make sure the story presents the facts accurately in a clear and understandable way.

Because of the depth and complexity of the story, organization can be difficult. It often works well to organize in connected chunks or blocks. Many reporters will separate these blocks with sub heads, making each block like a separate story within the whole. This makes it easier to write and more accessible for the readers.

Many in-depth stories begin with what has become known as The Wall Street Journal Lead. This lead will tell the story of one person as a way of introducing and illustrating the issue. The example can effectively lead into exploration of the broader issue.

Readers have to know why this story is appearing. Therefore, the reporter has to cue the readers. They often will do this with what some call a nut graph, a paragraph that explains the reason or purpose for doing this particular story at this particular time. The nut graph holds the entire in-depth story together for the audience.

Make sure the readers know the story ends. Reporters often will save a poignant or pithy quote for the conclusion. They also might conclude with a source identifying the progress they have made so far and where they have to go to move forward. Because the reporters have put so much effort into researching and writing this piece, they need to make sure they effectively end the story.

When the story is due, ask each team to give a brief summary of their issue, what they learned, what surprised them, and what it felt like to create this piece of journalism.

An Ethical Approach to Civic Journalism

By Mark Nepper
Although journalism has a strong code of ethics, there are “news” outlets today that make little or no effort at acting ethically. The media, however, has a responsibility to ethically present the news. Just what does that mean, and how can we teach students to develop an understanding of ethics as a guiding principle in gathering and presenting the news?
Read more

By Laura Streyle
Help students understand how to do background research and write an effective pitch for an article on a given topic.
Read more

The Authenticity Spectrum: The Case of a Science Journalism Writing Project

By Angela Kohnen
The SciJourn project, in which students learn to write like science reporters, was initially designed to help students develop scientific literacy. However, it became much more -- a key to high school students' engagement as learners, researchers, and writers and their teachers' opportunity to explore "real world" genre-based writing assignments and assessments. This article provides a rich discussion with specific examples that can guide teachers in developing writing assignments and learning experiences that take into account "functional authenticity." Those designing professional development, grants, summer institutes, or study groups on topics such as disciplinary literacy, genre, or authentic learning/writing will find ample food for thought!
Read more
Log in or register to bookmark your favorite content
You'll be redirected back here after logging in or registering.
Log in Register