This article examines the conceptual underpinnings and development process of the Civically Engaged Writing Analysis Continuum (CEWAC), a tool developed by the National Writing Project for assessing youth's civically engaged writing. It also makes the case for CEWAC as a powerful tool both for both classroom teachers and researchers to better see important attributes of civically engaged writing. 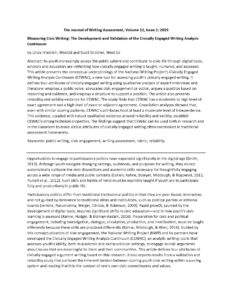 Participatory politics differ from traditional institutional politics in that they are peer-based, interactive, and not guided by deference to traditional elites and institutions, such as political parties or editorial boards (Jenkins, Purushotma, Weigel, Clinton, & Robinson, 2009). Rapid growth, spurred by the development of digital tools, requires significant shifts in civic education—and in how youth’s civic learning is assessed (Kahne, Hodgin, & Eidman-Aadahl, 2016). Preparation for civic and political engagement, including investigation, dialogue, circulation, production, and mobilization, must be taught differently because these skills are practiced differently (Kahne, Middaugh, & Allen, 2014). Guided by this conceptualization of civic engagement, the National Writing Project (NWP) and its partners have developed the Civically Engaged Writing Analysis Continuum (CEWAC), an analytic writing rubric that assesses youth’s ability, both in academic and extracurricular settings, to engage in civic arguments about issues that are meaningful to them and their communities. This article defines four attributes of civically engaged argument writing based on this research. It also reports results from a validation and reliability study that surfaced the inherent tension between scoring youth civic writing within a scoring system and reading it within the context of one’s own civic commitments and values.

By Casey Olsen
In this article, Casey Olsen, a high school teacher involved in the NWP's College, Career, and Community Writers Program (C3WP), describes an approach to teaching argument that helps his students "develop understandings and skills that change the way they experience the conversations that surround them." Olsen focuses on approaches such as "argument at a glance," that provide practice in building arguments, as well as reading and writing strategies that encourage students to understand and evaluate multiple perspectives on an issue rather than engage in binary thinking. Along with specific examples of issues that students considered in their work, Olsen provides an inspiring example of the impact that students' "solution-oriented" arguments had in their community. If you are working with colleagues to explore argument writing, this article offers a solid approach to helping students develop as thoughtful and ethical writers and communicators.
Read more

This resource from NWP's College, Career, and Community Writers Program (C3WP) features two strategies that teachers can use to assess students' source-based arguments. The "Using Sources Tool" focuses on the quality of students' claims and how well they use evidence to support them. The "Claim, Evidence, Reasoning Protocol" can help students and teachers see how well they have developed source-based arguments. This page also includes student writing that has been annotated through the lens of the "Using Sources Tool" to illustrate how teachers can use the tool in their classrooms. These assessment strategies can be useful for teachers in any content area who are looking for effective ways to analyze students' evidence-based arguments. Teacher study groups can examine and apply these two tools and discuss their impact.
Read more

By Nicole Mirra
Rather than viewing civic education as a particular body of knowledge, belonging in social studies class, Mirra argues that civic literacy is a set of skills that can be incorporated throughout the curriculum, reinforcing Common Core standards along the way.
Read more
Log in or register to bookmark your favorite content
You'll be redirected back here after logging in or registering.
Log in Register